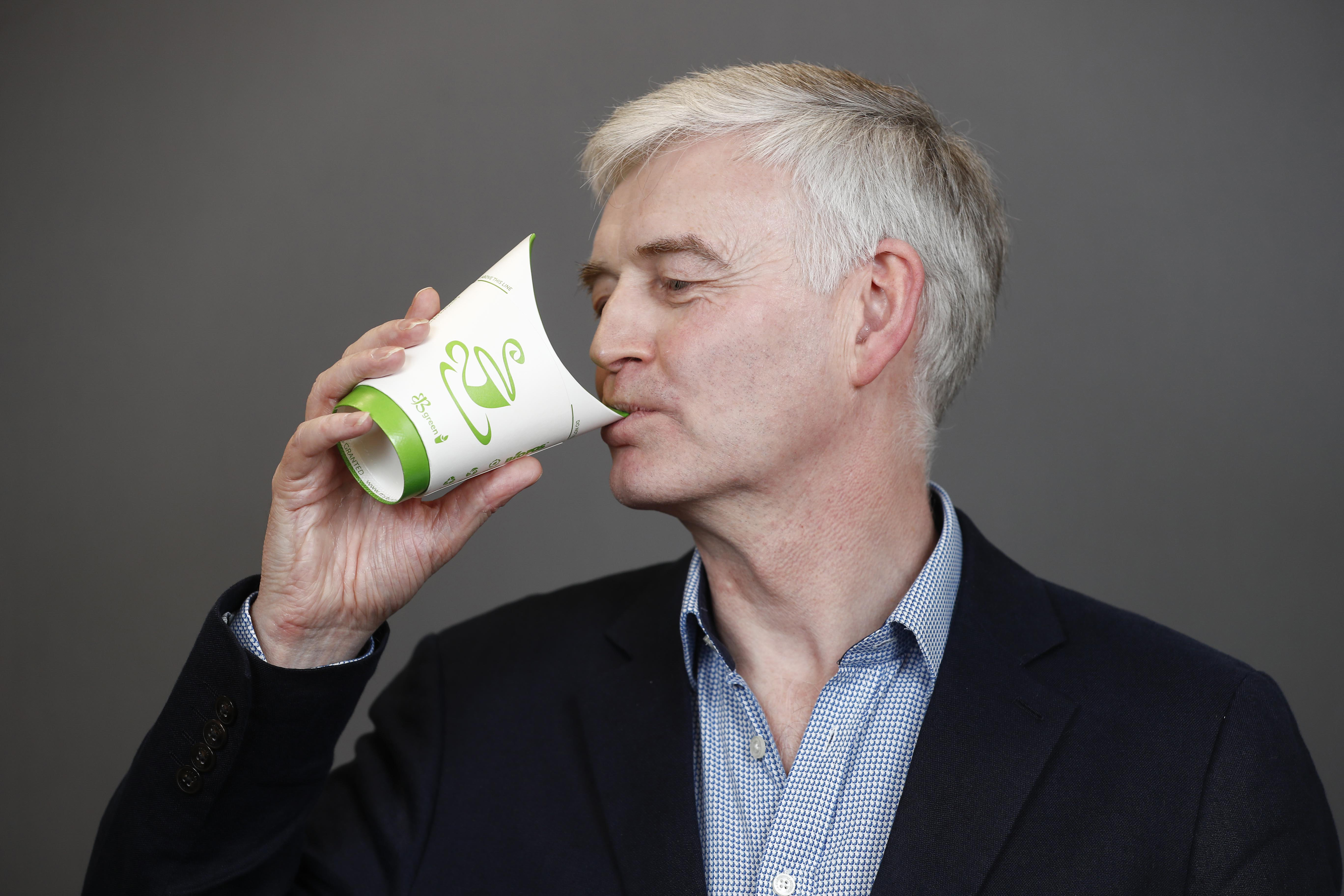 Plastic waste has become one of the great problems of modern life but one Irish company believes that it has the answer. Laois-based Butterfly Cups reckons coffee drinkers around the world will soon be enjoying their beverages from its innovative new products on a daily basis.

It has unveiled what it says is the world’s first 100pc plastic-free and fully recyclable all-in-one coffee cup, solving a global problem that has plagued the beverage industry for decades.

The company is in talks with at least five of the 10 biggest beverage retailers in the world about introducing the Butterfly Cup to their outlets, with a number already testing the product.

Tommy McLoughlin – the main investor in Hanpak, which trades as Butterfly Cup – believes that the product is set to revolutionise the beverage world with its unique design.

“The Butterfly Cup is the most environmentally friendly disposable cup in the world,” he said. The plastic that pollutes the environment from the 250 billion disposable cups used every year has become a massive issue for both consumers and for the global fast food and beverage brand that are selling many of the cups.

This, according to McLoughlin, means that the Butterfly Cup has come to market at the ideal moment to solve and capitalise on the problem.

“It will take a while to feed that massive supply chain but all the indications that we are getting are that the big brands are looking to change,” said McLoughlin.

Consumer pressure as well as taxes and bans on single-use plastic are driving a change that McLoughlin hopes will see us all drinking out of Butterfly Cups in a relatively short period of time.

“This is beginning to really catch fire. Plastic straws and the damage they do to the environment became a huge issue for people last year and that has really put a focus on the issue of disposable plastic straws and cups,” he said.

“We are talking to most of the big guys in the world and we are at various stages in the approval process. One major quick service restaurant is to trial the coffee cup in the UK and the cold cup in Indonesia to see what customer reaction is.”

Now, Butterfly Cup has been shortlisted in a worldwide competition organised by the world’s leading beverage retailers to deliver the holy grail of a plastic-free and fully recyclable beverage cup.

Butterfly Cup has been shortlisted from the 480 entries received from 53 countries.

“Of all the five concepts that have been shortlisted we are actually the only one with a fully developed product that eliminates both the plastic lid and the straw so we are in with a great chance of winning,” said McLoughlin.

The design – invented by McLoughlin’s partner Joe Lu – eliminates the need for lids or straws and it works for both cold and hot beverages. Another advantage of the cup is that if it is shaken it does not splash or leak, said McLoughlin.

Lu, who is originally from China but who has lived in Ireland for 25 years, was looking at ways of getting rid of the plastic lid that has become ubiquitous in coffee shops and fast-food outlets.

Back in 2012 Lu was looking for investment for the idea and McLoughlin – a chartered accountant by trade – had just sold his share of a value added food products business he was involved in with family members. “A mutual acquaintance put myself and Joe in touch and as soon as I saw the cup I knew it was high-risk but potentially high reward.”

Since then the pair have invested “millions rather than thousands” developing a modified cup-making machine to produce the cup on an industrial scale and further refined the design.

Another investor, Brian Ranalow, has come on board. Ranalow has industry experience and is the chairman and retired CEO of H&K International, an Irish company which is a major supplier of kitchens to McDonald’s and similar companies worldwide. The eco-friendly nature of the cup has been further enhanced by a development in the Finnish paper industry where a huge magazine plant has been converted at a cost of €170m into a new paper mill to produce a special kind of paper that can be used in drinking cups without using any added plastic or resin.

That means that the Butterfly Cup biodegrades quickly and can be recycled along with regular paper – unlike any disposable coffee cup product currently available. This, says McLoughlin, is the holy grail that no other disposable cup manufacturer has yet to bring to market.

Two patents underlie the design and are the key to stopping it being quickly copied by cheap imitators. The company, which raised €800,000 in EIIS funding last year, has invested over €500,000 to obtain these patents in the world’s main consumer markets, said McLoughlin.

The first patent is for the design of two curved paper flaps – which give the cup its name – and create a seal using nothing more than the countervailing pressure of one against the other. The second patent is for a paper insert inside the cup that stops splashes and spills. The simplicity is impressive.

“We spent a lot of time and effort getting the patents right and making them as broad as possible. It was a key investment,” said McLoughlin.

“Why work on something for years if some other guy is just going to make a minor adjustment and use the idea. We are very confident that the patents are good because they are utility patents, which are much harder for others to work around than design patents.”

McLoughlin said the company does not have a huge requirement for cash to fund expansion.

“Our business model right from the outset has been to license rather than to go into production ourselves. Production is very capital and knowledge intensive and the big guys are massive and are all multibillion-dollar companies. Rather than go into competition with them our business model is to make the design available to everyone and get a small license fee per unit.”

Given that the disposable cup market accounts for 250 billion units a year, capturing even a small percentage could be lucrative for the company.

“The reward could be massive. This is a volume-driven proposition. To date we have three licensees to manufacture the cup – one in China, one in Indonesia and one in South Korea – and we have three more in the pipeline that are well advanced.”

Already the company is selling five million cups a month. “That sounds a lot but compared to the overall market it is not even a drop. But we’ve sales in about 10 countries now, including Germany, South Africa, the US, Japan and small amounts in the UK, Canada and Ireland,” he said.

“Up to now most of our sales have been with smaller operators but it is the big guys that can really burst this market open for us but they take a little longer to move. But if one of the big guys has it then the others will follow.”

To guard against counterfeiting, the company has signed a deal with UK company Microfocus – previously a unit of Hewlett Packard – to use technology that gives each cup a code that can be scanned, allowing the company to identify whether a cup is the real thing or a copy.

For McLoughlin, the key thing is to get the cup into the hands of consumers after years of bringing it to fruition: “People do have an inherent resistance to change,” he said.

“The example I always use is the smartphone versus the Nokia and the idea of using a phone with no buttons. All of our feedback is that once people use this cup they adjust very quickly.”