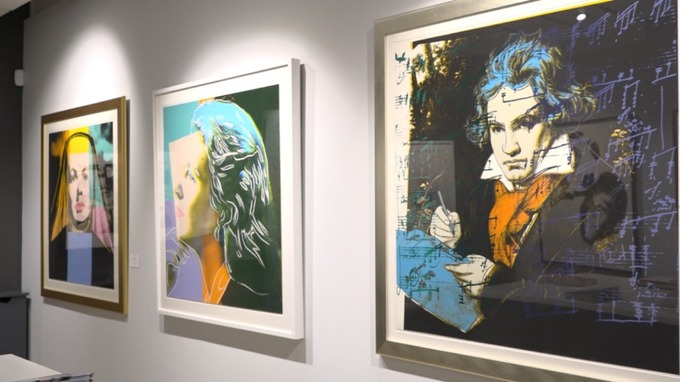 A £1m exhibition of Andy Warhol artworks has gone on display at a Belfast gallery.

Warhol’s renowned portraits of Marilyn Monroe, Mao and Muhammad Ali are among the works on display at Gormleys Fine Art Gallery, along with several pieces of his most sought-after Myths Portfolio collection.

Portraits and Party Time is the theme for the show, which celebrates fame and celebrity.

Among the cast of famous characters on show are Hollywood greats Ingrid Bergman and Greta Garbo and world-renowned sportsmen, footballer Pelé and boxer Ali.

Gallery director Gerard Gormley commented: “Warhol was famed for his celebrity friends, so it’s a good insight into people he would have enjoyed working with and creating artworks of.

“The rarest piece we would have on display is a unique trial proof of Beethoven, it’s unique in the sense that there’s no other pieces of that same colour combination available.

“It’s not something that comes to Northern Ireland that often, it’s part of a wider programme in the gallery to bring some of the world’s most famous international artists to Belfast and it’s just really nice to be able to show them to local people.”

Glamour and sparkle is another feature of the exhibition which includes Warhol works such as The Star from his Myths Portfolio.

This portrait of the actress Greta Garbo playing the dancer and spy Mata Hari, priced at £68,000, is screen printed in colour with diamond dust. The glittering addition is not actually made from diamond and is used to create a textured and luminous finish.

“The Star is considered one of the best of the Myths portraits and embodies everything Warhol adored – beauty, celebrity and wealth,” Mr Gormley added.

“The diamond dust he incorporated into the screen-printing process adds a wonderful lustre to the work.”

Also on show is Warhol’s Diamond Dust Shoe 257 and 253 works, which are also screen printed with diamond dust and are valued at £120,000.

The screen prints date from the 1960s and late 1980s when Warhol died and include a self-portrait of the artist.

Marilyn Monroe is among the artist’s most recognisable portraits and at the Belfast show is Marilyn Invitation – a signed miniature version of Warhol’s Marilyn created for his print retrospective.

The exhibition runs until 19 March.

Warhol’s renowned portraits of Marilyn Monroe, Mao and Muhammad Ali are among the works on display at Gormleys Fine Art Gallery.